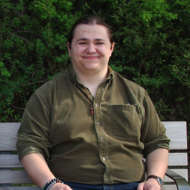 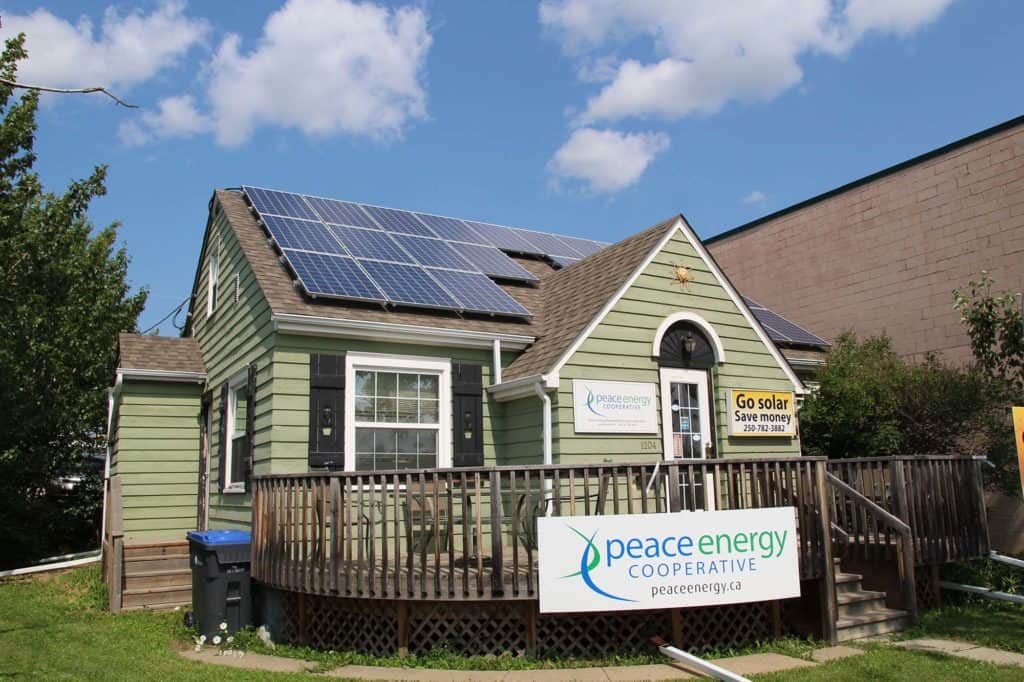 Dawson Creek sits just off the Alberta border in northern British Columbia. It’s named for the creek that runs through town and is known for being Mile “0” of the famous Alaska highway.

Dawson Creek has a population of roughly 13,000 and certainly has that small-city feel. While it has historically been an agricultural town there has been an influx of oil and gas in recent years. Another industry that’s gaining traction here is renewable energy. And of course, at the centre of this emerging sector is a co-operative.

The Peace Energy Co-operative (PEC) has been around since 2003 and has developed impressive wind and solar installations around the region. Its Dawson Creek office is a testament to its mandate — it’s located in a house with a rooftop full of solar panels. The panels provide enough power for the building to reach ‘net zero’, which means they offset the entirety of its energy consumption.

Our three excellent hosts in Dawson Creek are also founding members of the co-op and great guides to the region.

PEC Executive Director Don Pettit is the voice of the organization, and keeps people in the region up-to-date not just with PEC, but with all renewable energy news through his press releases and great blog (hilariously named “Watt’s Happening”). When you talk to Don, his passion for and knowledge about renewable energy is apparent.

Our other guides, Joanne Dueck and her husband Greg, told us about their experience driving an electric car in a rural area. (Joanne is a director of PEC, and Greg is its solar designer, so they know a thing or two.) They said it can be easy to rely on electric when driving the short distance to and from town and, if a longer range is needed, they always have the gasoline engine to rely on.

We were thrilled when Greg generously offered to let us test drive their hybrid! Neither Tanner nor I had ever had the chance to get behind the wheel of an electric car. We were both surprised by the vehicle’s unexpected acceleration and, having grown up in diesel trucks, the silence of the engine. We had a blast!

We also learned of their passion for renewable energy. For the Duecks, getting involved with PEC was about leaving a legacy and cleaner world for their children.

The pair also told us about the small town of Hudson’s Hope, west of Dawson Creek, which packs a big renewable energy punch. When its solar program was created, the town put out a press release with the headline “Hudson’s Hope Goes Solar, Big Time!”.

Joanne and Greg said the Hudson’s Hope solar project is PEC’s largest: 1,550 solar panels were installed on nine municipal buildings. I was amazed by the foresight of this small community – these panels are expected to save the municipality around $3 million over the next 30 years!

I was also glad to hear that the installation process employed several highschool students from Hudson’s Hope and that solar education and training opportunities were offered to the community. Education is a major aspect of the PEC, as they are often educating people about how a personal array can cut costs, or the impacts of their large projects.

Another big PEC project is the 34-turbine wind power installation on Bear Mountain. The windmills can be seen on the horizon from Dawson Creek, but we wanted a closer look.  Don, Greg and Joanne were happy to take us up.

As we approached the site I realized why we had taken a pickup truck — the road was a bumpy grid that reminded me of some of the backroads I had taken during my youth in southern Saskatchewan. I should have expected as much — the place is called Bear Mountain after all.

There was this beautiful moment when we got our first close look at one of the turbines through the truck’s sunroof. It’s a little hard to describe but they’re much taller than you think and nearly silent. The final effect is this lineup of quiet giants that blend mechanics with nature.

While Tanner was getting footage of these quiet giants I chatted with Don about the process of installing them. The three-megawatt Enercon turbines were shipped in from abroad while the towers were constructed in Canada. The installation has a production capacity of 102 megawatts. Don tells me that this is enough power for several Dawson Creeks!

Due to the massive nature of this project PEC had to bring on several partners, but much of the data collection and groundwork for this project was laid by this co-operative.

When we talked to Don, his love for the community really showed through. He spoke about having lived in a variety of cities in both the U.S. and Canada before coming to Dawson Creek. As a nature photographer Don fell for region’s rolling hills and beautiful foliage and decided to stay.

After seeing Dawson Creek from Don’s perspective, it was hard to disagree about its beauty. And while the views are great, so are the people and the unique co-op they’ve created.