A brief survey of Indigenous Co-ops in Canada

The co-operative business model has been relatively underutilized by Indigenous peoples in western Canada. Corporate structures and limited partnerships have more often been the go-to tools for Indigenous economic development. Many of these communities could benefit from measured integration of the Indigenous co-ops into this strategy.

By using the co-op model as a base for some of the development, additional jobs, training, wealth and capacity can be created, while also providing opportunities for increased autonomy and well-being.

What is an Indigenous co-op?

Indigenous histories and teachings suggest a long tradition of community-based co-operation within many of these communities. So, defining lines between what is government or co-operative or simply a way of being becomes hard to decipher – especially when the groups or Nations perform in a way that is indifferent, unaware or antagonistic to the rules and definitions of the ‘imagined communities’ surrounding and (often negatively) influencing them.

RELATED: Episode 2 of The Common Share “What makes up a co-op?”

Frankly, we’re not going to be able to answer these questions here. As the author of a 2000 federal report says, the Indigenous co-op label is necessarily a bit “ad hoc,” but this fact should be kept in mind nonetheless.

Today, there are relatively few Indigenous co-operatives in Canada. The majority of those operating directly within Indigenous communities currently are the 32 members of the Arctic Co-operatives Ltd. system located in the Territories and the 14 members of La Fédération des cooperatives du Nouveau-Québec (FCNQ).

The University of Saskatchewan’s Co-operative Innovation Project clearly outlines intermittent awareness and understanding of the model within rural and Indigenous populations. For Indigenous community leaders aware of the model, the reputation of co-ops is not always overly positive. In fact, a history of sporadic Indigenous engagement from the co-op sector remains a clear part of the oral and economic memories and realities of these communities.

So, how many are there?

A 2001 study by Lou Hammond-Ketilson and Ian MacPherson suggests 133 Indigenous co-ops in operation at that time. They define an Indigenous co-op as one “in which the membership is predominantly Aboriginal.”

In 2012, the Canadian Co-operative Association (CCA) attempted to compile a list of all Indigenous Co-operatives in Canada and identified 123. The CCA report included a co-op “if its membership declare – self identify – that Aboriginal people form a significant part of the co-operative’s membership.”

A 2000 report by the federal Co-operatives Secretariat includes a map with locations of what they define as Indigenous co-ops in Canada. The report also describes their process for deciding how to define an Indigenous co-op. But, in the end, “no proportion numbers (e.g. the percentage of Aboriginal people in the community that are using the co-op) were taken into account in this definition, [which] could therefore be described as ad hoc.”

This same report estimates there were 24,000 members of Indigenous co-operatives at that time, and together they had sales of approximately $250 million. In 2017, Arctic Co-operatives Limited alone had 22,000 shareholders and sales over $200 million. So, these figures are likely much higher today.

Fishing and trapping co-ops are difficult to measure as many operate informally, but it is expected there are at least 30 operating across Canada. With some of the interest we’re seeing in Manitoba and northern Saskatchewan, we hope to see this number increase.

Among the largest and most recognizable of these fishing co-ops is River Select. Based in Agassiz, BC, the co-operative’s shareholders are 8 First Nation owned fish producers operating across coastal British Columbia.

Member fisheries of the co-operative have a shared value for sustainable (in every sense – economically, traditionally and ecologically) fishing that is incorporated into their brand.

As a business, the co-op centralizes distribution for the fisheries, which creates efficiencies and adds value to their shareholders’ operations. Likewise, marketing as a single brand helps the 8 fisheries enter markets that working alone would be difficult to reach and serve.

While many Indigenous co-operatives are smaller, community-focused organizations, some have excelled in their industries, earning significant market share and recognition. One of these is Many Nations Financial Services, which originated in Onion Lake First Nation more than 20 years ago.

This financial co-operative aims to provide “aboriginal organizations and their employees with affordable and culturally appropriate group benefits, including pensions.” Today, Many Nations represents Indigenous organizations across Canada and manages over $100 million in assets.

As a federation, Arctic Co-operatives Limited provides a variety of services to its member businesses. Some of these services include group purchasing and distribution of groceries, fuel, clothing, hospitality (hotels and restaurants) supplies, admin services (human resources and marketing), telecommunication services, and recycling services. In 2017, the federation’s sales exceeded $200 million and over $9 million was returned to member co-ops through patronage dividends. 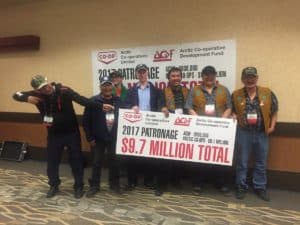 The local wealth generation this model provides for these small market economies can not be overstated. The Co-operatives Sectariat report says, “In the NWT, the number of co-ops (serving 100,000 Aboriginal population) is four times (i.e. 140/35) higher than that of the Aboriginal co-ops in all Canada. This result explains the importance of co-ops to northern communities in general and to the NWT in particular.”

A great example of a successful retail co-op is the Amachewespimawin Co-operative Association. Formed in 1978, this unique co-op has been operating for over 40 years and is owned by members of the Lac La Ronge Indian Band on Treaty 10 territory (Stanley Mission, SK).

Since opening, the business has steadily grown, offering everything from clothes and fishing gear to food and hardware. 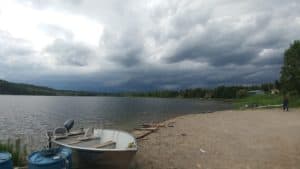 View from a boat launch near Stanley Mission, SK

A few years ago, the co-op expanded its services to provide a restaurant and gas bar. Today, the retail operation employs around 40 people and has sales over $8 million annually, which is an amazing feat for an isolated community in northern Saskatchewan.

In Alberta, the co-operative model has been used to provide utilities to First Nation communities through Rural Electrical Associations (REA). The Piikani, Montana, and Ermineskin First Nations all benefit from locally-owned and controlled power production.

Possible benefits of the co-operative model over a Nation-owned governance option is opt-in ownership and an additional governance structure. Both help build capacity in smaller communities and offer opportunities for personal growth amongst those who choose to run for the board of directors or volunteer in some other capacity.

The Muskoday Workers Organic Co-op and, the aptly named, Cree8 Worker Co-operative in Flying Dust provided both employment and locally grown fruits and vegetables to their communities. They also offered opportunities for knowledge sharing.

Operating in Winnipeg for over 28 years, Neechi Foods Co-op, which recently closed its doors, allowed employees greater control of their workplace and the opportunity to instill their ways and values into the business.

The Northern Star Worker Co-op first incorporated in 1996 and operates as a non-profit in Winnipeg. The co-op is 6 women with an interest in sewing and celebrating culture and tradition, and whose collaborative way of working together naturally led them towards the worker co-op model. The co-op specializes in hand-made star blankets and ships across Canada.

Food security is a challenge in many rural and remote areas. Within most cultures, food plays an important role in governance, community and traditional cultural practices – this is particularly true of many Indigenous communities.

Likewise, food sovereignty is a basic requirement in retaining or increasing autonomy for any community. Indigenous community leaders recognize the importance of growing and controlling their own food sources, and the co-op model is a great way to realize this opportunity. 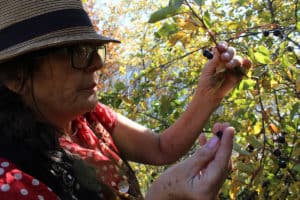 The Food Forest and Learning Centre Co-operative in Viscount, SK is increasing food security in rural Saskatchewan through traditional teachings and food harvesting. Some remote northern communities are looking to the co-operative model to bulk purchase as an alternative to traditional grocery stores. Old Crow in the Yukon Territory partnered with ACL and successfully replaced their Northern Store with a locally-owned co-operative.

There is no one-size-fits-all solution to food security in rural and remote areas, but in many cases the co-operative model can help structure a group of people interested in finding a solution.

Like fishers, many Indigenous artisans benefit from the co-operative business model through working together to create a single brand, increase efficiencies and access broader markets.

Well-known Indigenous artisan marketing/producer co-operatives, such as Dorset Fine Arts and Canadian Arctic Producers, have worked together for decades to reduce the cost of inputs, create a recognizable brand, and market their products in Canada and internationally.

The land base of many Indigenous communities coupled with a strong value for environmental stewardship has inspired several First Nations to invest in renewable energy. 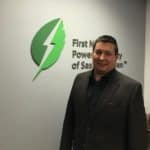 “Alberta’s approach is unique in Canada. Their Renewable Electricity Program is a great opportunity for Indigenous organizations to develop renewable energy projects that will not only benefit their communities but also help the province green its electrical grid,” Guy Lonechild, Chief Executive Officer, First Nations Power Authority said in a recent media release.

The co-operative model can be an effective tool for formalizing relationships between communities and investors interested in these projects, while also ensuring equitable decision making around the table.

Moreover, by increasing locally generated power, Indigenous communities can reduce reliance on outside providers, which in some cases also means saving on exorbitant electric heating bills.

In Manitoba, hundreds of fish harvesters are exploring a co-operative option to the Crown-owned Freshwater Fish Marketing Corp. Having this option will offer fishers in the province the opportunity to maintain greater influence over downstream decisions that impact their livelihoods.

First Nation leaders also recognize the opportunity for greater involvement in agriculture. The opportunities include market/community gardens or greenhouse developments, the marijuana and hemp industries, and large-scale farming.

“If you look at the opportunities that First Nations have across [Canada] we have a huge land base that could produce umpteen products and be a huge supplier into the food chain worldwide,” said Paul Ledoux of the Muskeg Lake First Nation in a recent conversation.

Using the co-operative model to collaborate across Nations, accessing this land base and creating an ‘Indigenous-made’ brand could yield significant benefits.

Some co-operatives in western Canada are making efforts to recognize and honour the important relationship between Canadians and Indigenous peoples.

Three western Canadian credit unions, in particular, have publicly responded to the calls of the Truth and Reconciliation Commission by making a joint declaration on reconciliation. Vancity, Affinity, and Assiniboine Credit Unions each signed on to this joint declaration, which states they:

“embrace the principles of the reconciliation framework, and recommit to the ongoing work of embedding the spirit and substance of meaningful reconciliation in our policies and operations, as fundamental to the decisions we make in pursuit of healthy, vibrant communities characterized by inclusion, justice and sustainability.”

The Co-operative Retailing System through Federated Co-operatives Limited has also made significant efforts towards reconciliation. The $5 million-dollar investment in Co-operatives First to promote and support business development in rural and Indigenous communities based on the co-operative business model is one example. Another is their recent $1 million-dollar donation to the Thundering Ahead project.

Now is the time

It’s an exciting time to be involved in Indigenous economic development. A lot is happening. At Co-operatives First, we’re honoured to have the opportunity to support Indigenous groups, organizations and Nations working to see their communities grow and thrive. Our goal is to see the co-op model play a beneficial role in this ongoing development.